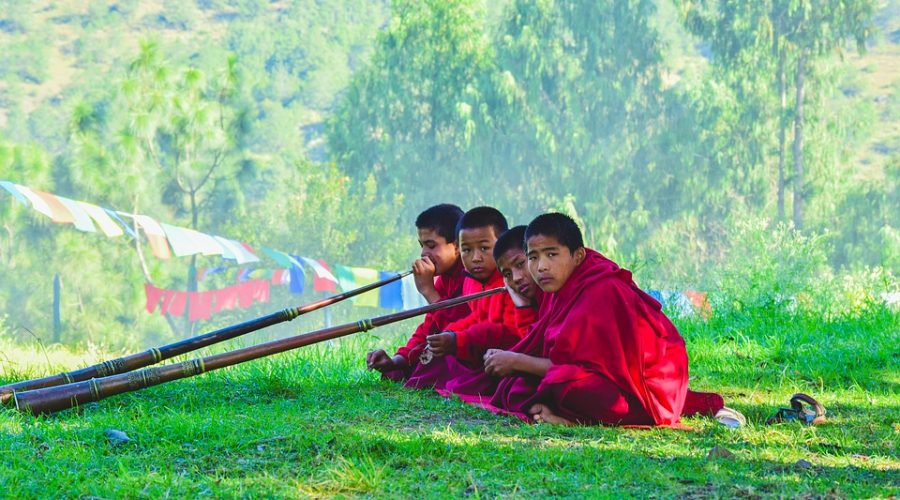 Drive to Thimphu after picking up from Paro International Airport (2280m). Depending on the arrival time of the Druk Air flight or Bhutan Airlines, you will either be served a meal in Paro or be driven straight to Thimphu, the capital city, which is about 53 Km away. The drive normally takes about an hour and a half. If Thimphu is reached early, you can go out in the town and mingle with the Bhutanese people. Dinner will be served in hotel.

Sightseeing in Thimphu (2320m) includes visits to: National Library which was established in 1967 and has many ancient Dzongkha and Tibetan texts); Painting School or the National Institute for Zorig Chusum (the 13 traditional arts and crafts like painting, woodcarving, embroidery and statue making et al..; National MemorialChorten, built in 1974 in memory of the third King of Bhutan; Semtokha Dzong which is about 5 Km south of Thimphu. This Dzong was built in 1629 by Shabdrung Ngawang Namgyal. Today it houses the Institute for Language and Culture studies;  Tashichhodzong – the seat of the Government of Bhutan. It houses the secretariat, the Throne Room, His Majesty’s secretariat, the Ministry of Home and Cultural Affairs and the Ministry of Finance. If the sight seeing falls on the weekend you can visit Thimphu’s open vegetable market where farmers from the nearby an far off provinces bring their farm produce to sell.

The first stop on this road journey is at Dochula pass at 3,140 meters. Dochula is about 23 Km from Thimphu and on a clear day, one have a clear view of the Himalayan snow peaks. After a short refreshment in Dochula, the journey continues to Punakha. Lunch will be served at the hotel. After lunch, drive to Punakha and  then to Wangduephodrang for sightseeing.  Punakha Dzong was built in 1637 and was the former capital of Bhutan. It lies at the confluence of the Mo Chu (female river) and the Pho Chu (male river). Punakha Dzong still serves as the winter residence of the Central Monk Body. Wangduephodrang is about 21 Km from Punakha and its Dzong that sits on the top of the high ridge was built in 1638. The ridge provides a panoramic view of the valley. Wangdue Dzong caught on fire and completely burnt down in June 2012 and is under major restoration works. Dinner will be served in the hotel.

After the breakfast drive to Trongsa. Trongsa is 129 Km from Wangduephodrang. Check into hotel.

Day 5: After breakfast, visit Trongsa Dzong, one of Bhutan’s oldest historical, political and religious monuments also known as Druk Minjur Chhoekhor Rabtentse Dzong. Built 463 years ago, Trongsa Dzong sits high on a ridge, overlooking the Mangde Chhu (river) and represents an important link with Bhutan’s precious Institution of monarchy hereditary. It is the Dzong where every future Kings formalized their ascension as Chhoetse Penlop before ascending to the Golden Throne. His Royal Highness, Crown Prince Dasho Jigme Khesar Namgyel Wangchuck, the present King of Bhutan was as the Chhoetse Penlop in Trongsa Dzong.  This ceremony took place on October 30, 2004. After the visit to Trongsa Dzong, visit Ta Dzong, the watchtower of the Trongsa Dzong. The chapel inside the tower is dedicated to the Jigme Namgyal, the 19th century Trongsa Penlop (Governor). After lunch drive to Gangtey.

Gangtey Goempa (monastery) overlooks the large green expanse of Phobjikha valley, a glacial valley on the western slopes of the black mountain range. The valley is an important wildlife sanctuary in Bhutan and is the roosting ground of the endangered blacked necked cranes that flies from the Tibetan plateau during the winter time. Overnight stay in hotel.

Day 7: Gangtey to Paro via Thimphu

Drive to Paro after the breakfast. Lunch on the way in Thimphu. Overnight halt at Paro.

After breakfast, visit the National Museum – Ta-Dzong, built in 1656 and served as the watch tower of Paro Dzong in the past. Visit Paro Dzong, also called the Rinchen Phug Dzong, meaning a fortress on a heaps of Jewels. Paro Dzong is one of the most impressive and well-known Dzongs of Bhutan and was built in 1644. After lunch in town, proceed towards Drukgyel Dzong, 14 Km from the Paro town. Drukgyal Dzong is also known as the Fortress of Victory – which was built by Shabdrung Ngawang Namgyal in 1649 to commemorate the victory over Tibetans who invaded Bhutan in 1644.  En-route to Drukgyel, you can have a view of Taktshang monastery, perched on a cliff about 900 meters above the valley floor. Legend says that that Guru Rimpoche, who brought Buddhism to Bhutan in the 8th century flew to a cave on tigress and mediated for 3 months, 3 weeks and 3 days.. Return to the hotel and dinner will be served.

After an early breakfast, our representative will see you off at the Paro International Airport