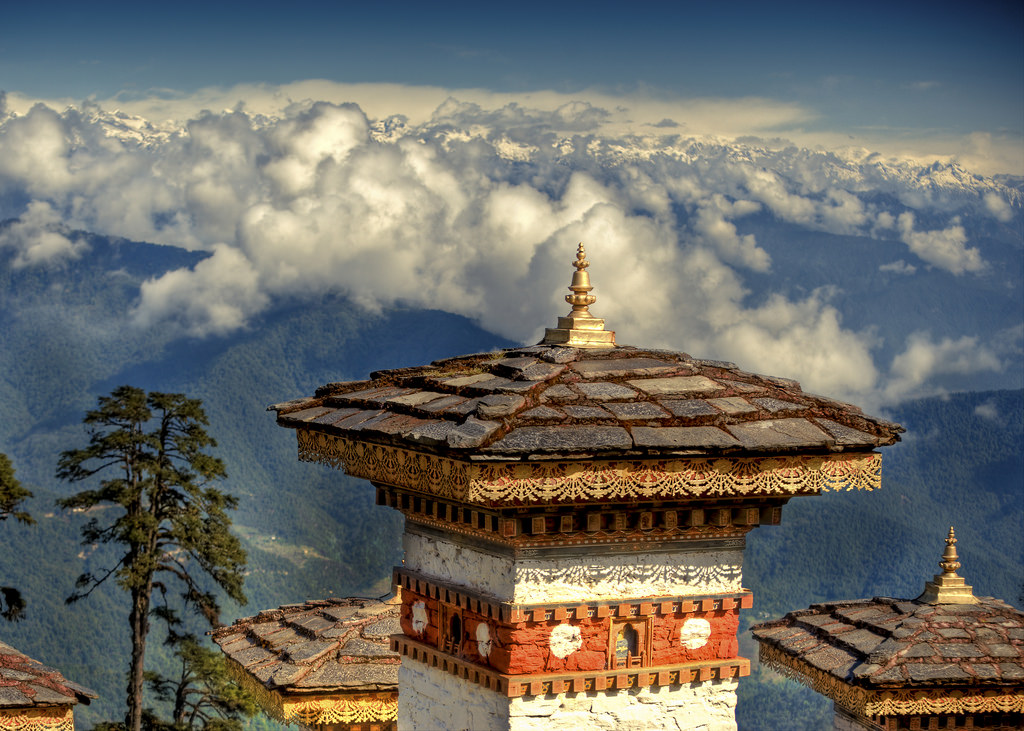 Drive to Thimphu after picking up from Paro Interational Airport (2280m). Depending on the arrival time of the Druk Air flight or Bhutan Airlnes, you will either be served a meal in Paro or be driven straight to Thimphu, the capital city which is about 53 Km away from Paro. The drive normally takes about an hour and a half. If Thimphu is reached early, you can go out in the down-town and mingle with the Bhutanese local population. Dinner will be served in hotel.

Sightseeing in Thimphu (2320m) includes visits to: National Library, established in 1967 and has many ancient Dzongkha (national language of Bhutan) and Tibetan texts, Painting School or the National Institute for Zorig Chusum (the 13 traditional arts and crafts that includes painting, woodcarving, embroidery, tailoring, sculpture, and statue making et al..), National Memorial Chorten which was built in 1974 in memory of the third King of Bhutan, Semtokha Dzong, which is about 5 Km south of Thimphu. Semtokha Dzong was built in 1629 by renown monk teacher – Shabdrung Ngawang Namgyal. (Today, it houses the Institute for Language and Cultural studies.), Tashichhodzong – the seat of the Government of Bhutan. It houses the Secretariat, the Throne Room, His Majesty’s Secretariat, the Ministry of Home and Cultural Affairs and the Ministry of Finance. If the sight seeing falls on the weekend, you can visit Thimphu’s open vegetable market stalls, where farmers from the nearby and far off provinces bring their products to sell.

The first stop on this road trip is at Dochula pass at 3140m. Dochula is about 23 Km from Thimphu. On a clear day,  it offers a spectacular view of the snow peak Himalayas. After a short refreshment in Dochula, the journey continues to Paro. It is about 72 Km from Dochula to Paro. The lunch will be served in the hotel. In the afternoon, the sightseeing of Paro starts. The sightseeing includes a visit to the Ta-Dzong, (National Museum) which was built in 1656 and served as the watch tower for Paro Dzong in the past. After the Ta-Dzong visit, go to the down-town and mix with the local people and some shopping in the town. Dinner will be served in the hotel.

After the breakfast, proceed towards Drukgyel Dzong, 14 Km from the Paro town. Also known as the fortress of victory.  This Drukgyel Dzong was built by Shabdrung Ngawang Namgyal in 1649 to commemorate the victory over Tibetan invaders who invaded Bhutan in 1644. On the way to Drukgyel Dzong,  one can have a panoramic view Takshang Monastery, perched on the side of a cliff that is 900m above the floor of Paro valley.

The rich folklore among all Bhutanese people is that Guru Rimpoche, who brought Buddhism to Bhutan in the 8th century, flew to a cave in Taktshang on a tigress and mediated for 3 months, 3 weeks and 3 days.
Drive to Paro town for lunch. In the afternoon, visit Paro Dzong which is also called the Rinchen Phug Dzong,  meaning the heap of Jewels. Paro Dzong is one of the most impressive and well-known Dzongs of Bhutan and which was built in 1644. Back to the hotel for tea/coffee. Visit the town for last minute shopping. Dinner will be served in the hotel.

After an early breakfast, our representative will see you off at the Paro International Airport.